One of Shkodra’s best culinary experiences.

Vila Bekteshi is the restaurant that represents the evolution of the Shkodra’s civic tradition- a shelter of good taste.

It’s important for us that you find yourself in our restaurant. That is why you will find a variety of taste so that you can find a dish that suits you best. An Italian based menu, with dishes and taste that dissolve in the most pleasant way, but also traditional Albanian food, will offer you all you need to pass enjoyable moments at our home.

The story of 120 year old villa

Vila Bekteshi is one of the best, oldest and most traditional restaurants.

It’s perfect for those who want to experience another Shkodra’s dimension: civic culture into cooking.

The building that we today know as  restaurant “Vila Bekteshi” was built at the end of XIX century according to a foreign project commissioned from it’s owner Hasan Bekteshi (1862-1928) one of the biggest traders of Shkodra.

The 3 stores building has elements of neoclassical style, brought in Shkoder during the second half of of XIX century, thanks to numerous trade exchanges, particularly with Italy. Bacause it had a really special architecture at that time, it was called “Vila Bekteshi” by locals.

The use of Vila Bekteshi in years was to be given for rent. During XX century important personalities of albanian history temporary lived there, including Esat Pashë Toptani, major Hasan Stafa (father of Qemal Stafa).

At the year 1950 this building was nationalized by communist regime and with placement of democratic system it was given back to the ex-owners by 1992, heirs of Hasan Bekteshi, but during riots of the year 1997 this building was totally burned together with State Bank.

The new story of Vila Bekteshi starts at year 2002 with its reconstruction by its actual owners Çoçja family. Reconstruction was made conserving architectural values that this building had and by new owners will it was decided to keep the origin name, Vila Bekteshi. Since then Vila Bekteshi has become synonymous of restaurant in Shkoder.

A short biography of the founder Hasan Bekteshi 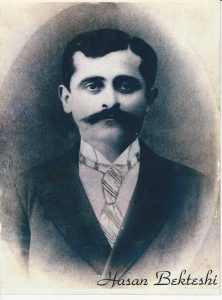 The old owner of the villa, Hasan Bekteshi, was born at 1862 in a civic family with a
well economically being.His grandfather was city’s commander during Pashalik of Shkodra times, and his father also had leading posts in Shkodra.

His father’s death found him at a young age, only 14 years old, making him responsible for his family well- being. This thing made him to enter trading activity, starting with the city of Korça, where he took and the “little gega” nickname.

At the age of 15 he went in the war against Montenegro’s invasion (Ana Mali battle 19 November 1877), and in the passing years he was very supportive of the activities and efforts to declare the independence of Albania, by holding connections with diaspora (from where clandestinely came books and magazines in Albanian language) and with many distinguished figures of the Kosovo war for freedom like: Hoxhë Kadria, Isa Boletini, Bajram Curri.

Even after Albania declared autonomy, Hasan Bekteshi continues his commitment at economical, social and political life of Shkodra in participating into Local Administrative Council established by Austrians at 1914, when Shkodra was administered by the International Commission. But after the reconquest of Shkodra by the Montenegrins in 1915, he was arrested along with other activists, including Luigj Gurakuqi, Çerçiz Topulli, Hilë Mosin, etc. and was held prisoner in Podgorica for several months. In April 1917 he was part of the delegation of 34 representatives from Albania who met with the new emperor of Austria-Hungary, Carl I, successor of Franz Ferdinand, to thank him for the autonomy that the Habsburg empire had recognized to Albanian lands

Consolidation through years of the trading activity also with Turkey, Austria, Italy, made him realize the need to buy a merchant ship, which ended sinking during World War I from damages caused by a battleship.

He was an autodidact man at learning foreign languages and trading rules, very emancipated for the time, mentioning the fact that he sent his four daughters at a nun school (his older daughter was the first muslim girl to study in a catholic school) and two suns to study in Austria and Italy. He was known for good friendship relationships with the catholic part of the city.

It was a coincidence that during his agony in bad health conditions, were present Bishop and Pop, whom were his friends and were there for a visit.

Between his friends was even father Gjergj Fishta, who dedicated the epitaph which he had written on his grave.

He took many courageous initiatives at the time, like the idea of deepening the Buna river to make possible for larger ships to sail there. To make this possible he also with another trader from Shkodra, Tef Curani went at KRUP Germany to propose the possibility to invest on this project.